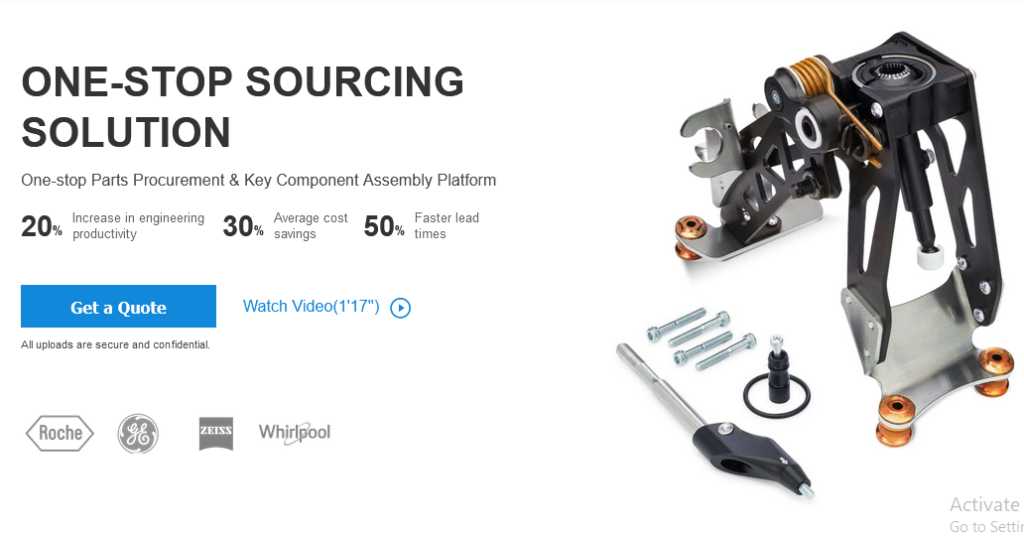 LONDON, 9-Jan-2022 — /EPR INDUSTRIAL NEWS/ — Headquartered in Shanghai, China, Haizol are growing from strength to strength in the manufacturing industry. From inception in 2015, they have opened offices throughout China year on year. Haizol now have a presence in 12 cities across China, making them the go to platform for connecting with manufacturers for custom OEM parts and products. Currently Haizol are in Shanghai, Shenzhen, Ningbo, Wuxi, Dongguan, Foshan, Huizhou, Suzhou, Changzhou, and Hangzhou. Last month they opened a new office in Suzhou, with an opening ceremony attended by government officials.

Haizol assists small and medium sized manufacturing enterprises in the procurement of resources, meeting output quotas, and manufacturing of traditional parts and components. Their one-stop sourcing solutions platform offers buyers a complete service from start to finish. From your requirements, they locate the best suppliers, then take care of the whole process from the initial order, to quality and inspection, and shipment.

Haizol’s connections span throughout China, having partnered with the best factories that specialize in CNC Machining, Injection Molding, Casting, Stamping, Fabrication, and Mold Making. Haizol also manufacturing products, from a simple CAD design, they can produce the product from prototype to full scale production. Haizol are experts in reverse engineering, whereby products are broken down into the separate parts in order to re-build and re-brand them.

Haizol’s instant quoting technology and extensive network of suppliers has revolutionized the custom manufacturing industry. Providing customers with quotes in under a minute, they get on demand access to high quality low cost manufacturing. For startups or large companies, 2D or 3D drawings can be securely uploaded to receive a dynamic quotation.

LONDON, 22-Feb-2021 — /EPR INDUSTRIAL NEWS/ — We are moving more and more into an on-demand world, where the companies who embrace digitalization and agility thrive. We have witnessed that the companies surviving in this new era of manufacturing are the ones who go digital, be agile, and mitigate risk.

The recent pandemic has resulted in new ways of working, highlighting the importance of getting immediate access to products and services. As manufacturers navigate the new normal, realizing digital agility has never been more important.

Having a responsive supply chain proves essential. Once you take a product to market, it is key to safeguard the supply chain. With a constantly changing market, your supply chain should be able to rapidly respond to satisfy demand where that means making more of the same product, or shifting focus to another more in demand item.

When done correctly, automation paves the way to digital agility. Agility results in lower cost and errors, whilst increasing productivity and sales. Digital agility enables manufacturers to quickly pivot when faced with disruption.

When manufacturers get it right, automation provides a path towards digital agility, which ultimately leads to the reduction of cost and errors, while improving productivity and raising revenue. Digital agility is especially important amid COVID-19 disruptions, as it allows manufacturers to quickly pivot.

Digitalization and technology help companies embrace new market trends. Market opportunity is evident in industry, the capture this, companies and their manufacturing partners need to push the existing boundaries and strive to push themselves and digitalize their processes. As products and services are moving more and more on-demand, only those that embrace this will gain competitive advantage.

LONDON, 19-Oct-2020 — /EPR INDUSTRIAL NEWS/ — The Caixin China General Manufacturing Purchasing Managers’ Index (PMI) measures the performance within the manufacturing sector, and is based on over 400 private industrial companies in China. The PMI shows a steady figure of 53.0 for September 2020, suggesting manufacturing growth remains robust, and factory activity continued their recovery path since COVID-19 hit.

China’s manufacturing industry this last quarter has exceeded last years readings, aided by a COVID-19 measures being relaxed. There was a new rise in orders, and buying levels were at an all time high since 2018.

New export business in China has seen its largest increase since 2017, alongside purchasing activity reaching its highest level of the last decade. This year has also seen the highest number of new orders since the beginning of 2011. Haizol has witnessed continued growth from the middle of the year until now, finding an increased number of buyers want to move to digital manufacturing, and find value in Haizol’s hands off, online sourcing offering.

China manufacturing has also demonstrated its resilience through employment figures, which have now stabilized after a turbulent couple of months of job shedding. Key manufacturing companies showed growth in input costs have risen, yet there has been no significant rise in selling prices due to tough market competition. Haizol, who have experienced continual growth to their customer base, have also maintained that keeping their prices low is imperative to their customer centered approach, and remaining the most competitive in the market.

The economy in China has demonstrated it has got its momentum back post epidemic, with manufacturing expanding the most since 2011, according to the Caixin index. In 2020, it has beaten the market consensus month on month, with successive growth in factory activity and the sharpest in almost a decade, as consumer demand continued to expand after the pandemic. With index figures at a 6-month high, and with a renewed increase in orders month on month, buyers worldwide can order parts with confidence.

Whether a company is looking to outsource a prototype, or full-scale production, Haizol are experts in metal and plastic custom part production. Companies of all sizes receive a tailor made, customer focused service.

The Nominations and a Seminar on “Selling to the U.S.” will be held on April 15th at China Mart’s New Offices at the YiWu Mart (Shenzhen). 11 winners will be announced in China based on Nominations received by April 26th (Register Nominees & Rules for Chinese Company Exporter Award at: http://www.chinamartusa.com/e-news.htm). 11 Winners will be invited to China Mart Los Angeles on June 24th, 2010 announcement of Grand Prize Winner of 1 Yr Free Showroom and Marketing promotion at China Mart exclusive Los Angeles International Airport Showrooms. Chinese companies coming to Los Angeles will be hosted for 1 week with match making buyers event and business survey / introduction to Los Angeles business community and government.

Balli Steel, one of the world’s largest privately owned independent commodity traders, reports that China is expanding into the iron ore market and increasing its steel production capacity, against a backdrop of declining worldwide production.

Balli Steel estimates that Chinese steel production already stands at over 400 million tonnes for the first 7 months of this year compared with 560 million tonnes during the whole of 2008 and only 200 million tonnes as recently as 2000. Domestic consumption of steel has also increased sharply in recent years from just 25% of global production 10 years ago to nearly half today. However, increased supply has enabled China to become one of the leading exporters of steel, joining the ranks of the EU and Japan, with exports exceeding 20 million tonnes.

Balli Steel highlights that three factors are currently driving China’s growing dominance in the global steel market. The first is the scale of domestic demand for both industrial and construction steel, which is currently evenly balanced, with the latter a reflection of the property boom in leading cities such as Shanghai, Beijing, Tianjin, Guanzho and Hong Kong. Real estate development grew by 10% in the first half of 2009 and automobile manufacturing grew by 16.4% during the same period resulting in increased demand for steel.

The second factor is that the depreciation of the US Dollar against the Yen and other world currencies is now reversing. In addition, other countries, such as Indonesia, are also seeing their currencies strengthen which is enabling their economies to stabilise adding to the demand for steel products.

The final driver is that the slight upturn in demand, combined with the fact that destocking has occurred, has led to an upward pressure on prices. Steel billet prices have risen from $300 per tonne two months ago to current levels of $450 per tonne.

Nasser Alaghband, Director of Balli Steel commented: “Both consumption and production of steel in China remains strong against a global backdrop of falling supply and continuing uncertainty in demand. China’s dominance of the global steel market is an indicator of the wider strength in the Asian market which has also seen an increase in production in other countries such as India and rising exports in Japan, albeit at lower levels than 2008.”

Mr. Stephen Perl, CEO of China MartTM Los Angeles states, “China Mart Los Angeles is designed as a business platform providing support to Chinese manufactures entry and investment into the U.S. through access to the U.S.’s Largest Market in the World, customized marketing support, and financing support through our partner, 1st PMF Bancorp that specializes in lending to Chinese and U.S. businesses (www.PMFbancorp.com / www.PMFbancorp.cn ).”